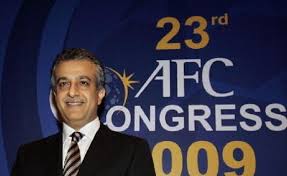 What no one expected is that the boss of Asian Football would echo those sorts of comments on the evening before the final of a hugely successful Asian Cup tournament hosted on Australian soil.  But reports have emerged overnight that in an interview with a Dubai newspaper, Asian Football Confederation president, Sheik Salman Bin Ibrahim Al-Khalifa, said he was aware of a movement to have Australia expelled from Asian football.  And it’s not just the Gulf nations like Bahrain, 2022 World Cup host Qatar and UAE (who the Soccerroos beat 2-0 this week in the semi final) who want Australia out.

Salman says he is content with Australia’s involvement in the AFC but says dissenting nations could raise the issue at this year’s general assembly.

In other words, nobody likes us. Or perhaps they just don’t like that we’re successful at this level.

Australia’s involvement in Asian football dates back to the start of 2006, when we left the Oceania conference.  As a member of Oceania, Australia had endured super tough qualifying roads to the FIFA World Cup. Every four years we were forced to play the fifth-best qualifier from South America. Every four years, we lost.

Then in 2005, we played Uruguay for a spot at the 2006 World Cup in Germany. The Socceroos famously squeezed through, thanks to Mark Schwarzer magic and that John Aloisi penalty with its shirt-swirling aftermath. It would be the last time we were forced to qualify via South America.

From 2006 onwards, Australia has sought World Cup qualification via one of the four spots reserved for Asian teams. The move has worked. We made it to the World Cup in both 2010 and 2014, and have also performed well at the Asian Cup (although we haven’t won one yet — but that could happen on Saturday against South Korea!)

But Australia’s World Cup qualification success and Asian Cup success has made life tougher for Gulf nations and other football hopefuls in Asia. And despite the 2015 Asian Cup being a fantastically successful, friendly tournament (as you’d expect for any major sporting event hosted here), there are apparently those who want Australia out.

The fiery quotes by Asian football chief Sheik Salman Bin Ibrahim Al-Khalif are not available online. However news.com.au did find on the Al-Ittihad website a piece from a columnist which appears very much in step.  It reads:

“Is it time to assess the decision to allow entry of  Australia into the AFC system, the question presents itself, and also pointed to achieve yesterday that the relationship between the two parties (Australia and AFC) is nothing more than the love of one party, is the Australian party certainly, private with confirmation of the marketing committee of the Asian continent, that football has not benefited from the participation of Australia.”  – Google translated and reviewed for context.

To Australians, this just sounds like sour grapes from the oligarchs of oil-rich Arabian states unaccustomed to not getting things their own way. It is interesting that this is the same oligarchs that let Australia into the AFC, but perhaps they didn’t expect them to be so good.  Now they are, they want to change their minds.

Now correct me if I’m wrong, the term Australasia is indicative of the country’s location.  If Indonesia is Asian then so is Australia as they are neighbours.  Or perhaps FIFA needs to do an overhaul of its confederation membership and World Cup selection procedures.