VH-UER and the Australian $20 note

I have often noted the aircraft VH-UER depicted on the Australian $20, and have wondered what it’s history was. 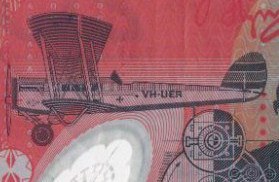 The aircraft was original registered G-AUER was a De Havilland D50A and was used for general aviation until 1928 when it was refurbished for use as the first air ambulance for the Australian Inland Mission (AIM) – as can be seen by the small Maltese Cross under the pilot’s cockpit. Upon starting service under contract for the AIM, The Rev John Flynn, the famous Flying Doctor, renamed it ‘Victory’.

This De Havilland could carry a pilot and four passengers at a cruising speed of eighty miles per hour for a range of 500 to 600 miles. In those days, not much territory was charted, and so pilots were forced to navigate by river beds, fences, telegraph lines and other familiar landmarks. Despite these obstacles, in its inaugural year, the Aerial Medical Service (which changed its name to the Flying Doctor Service in 1942 and the Royal Flying Doctor Service in 1955) flew 50 flights to 26 destinations and treated 225 patients. Flynn’s dream had become a reality.