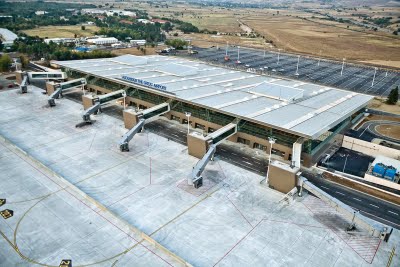 A new chapter in the history of Skopje Alexander the Great Airport began as it opened the doors to its brand new terminal. The multi million Euro project took just over a year to complete and will allow Macedonia’s capital to have the most modern airport facilities in the former Yugoslavia. The new terminal at Skopje Airport is ten times the size of the current terminal building, which was built in 1987 and will be closed as of tomorrow. The new terminal stretches over two levels and 40.100 square metres. Besides the new terminal the runway has been lengthened in order to accommodate larger aircraft. Furthermore, millions have been invested into supporting infrastructure such as access roads, a car park and an administrative office building. 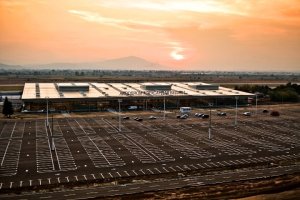 Macedonia’s Prime Minister said that the new terminal was one of the biggest and most complex investments in the country. Thousands of people turned out to see the opening of the new terminal. Special busses were organised from the city centre so the public could get a glimpse of the new facilities and look around.

TAV will now begin work in other fields to improve the airport’s offering. The company will soon begin the construction of a new web page for both Skopje and Ohrid airports and will work with the Skopje public transport
company for it to have a bus line from the airport to the city. The operator is also working hard on finding an established airline to base an aircraft in Skopje, which would lead to an increase in passenger numbers. In the first half of the year, Skopje saw a passenger increase of 8%. 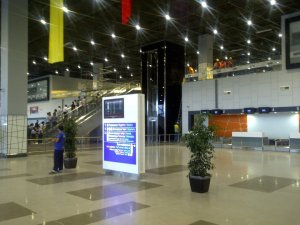 A total of 110 million Euros has been invested into the new terminal which features air bridges, several duty free shops, a food court, 23 check in desks, over a dozen passport control counters and has the capacity to handle 4 million passengers per year.

Oh dear! Oh dear! I fear that this just another example of poor investment.

Most of the “visitors” through Skopje will be returning ex-patriots who are visiting relatives and families in MK. The amount of true tourists who have no familial ties to Macedonia can be measured in the hundreds annually.

Speaking from experience, Skopje can be a difficult destination to get to, depending on where your journey starts. For example, try coming from the UK! Only Wizz Air offers a five days a week flight direct Luton-Skopje, and they can be extremely difficult to deal with. So last time I came to Skopje from the UK, it was via Munich-Belgrade-Skopje.

But back to the point, projected “increases” in passenger throughputs are highly speculative and inaccurate. What is there about Macedonia that suddenly will increase tourism? Transit passengers to where? Macedonians who can afford to fly, do so as fares out of other Balkan airports are cheaper due to high fuel costs in MK. So is that going change? I suspect not! Macedonia has no national carrier since the debacle that was MAT, and cannot attract an airline to base there. So what is going to change to support this airport? Gospo znaj! (God knows!)

I’ll be there again in September to find out what has changed. My best guess? Nishto! (Nothing!)

When this so called “investment” dos not pay off, who is going to be left carrying the can? You can bet it won’t be the Turks (no disrespect intended or inferred), rather the Macedonian people through the financial ineptitude of their government!

I am a little slow getting this post published.  My first day back in control after 3 weeks holiday, I was called upon to manage control of this school bus accident. 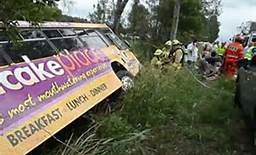 The school bus had veered off the road and ended up where you see it now. On board the bus were 33 children and the driver.

Paramedics treated all of these people and were transported to the nearby hospital.

The cause of the accident being investigated.