As aircraft and ships continued to search for  debris which might be that of the missing flight MH370 on Friday a Malaysian  woman on a flight across the Indian Ocean claimed to have seen an aircraft in  the water near the Andaman Islands on the day the jet disappeared.

The Kuala Lumpur wife was so convinced  about  what she saw at 2.30pm on March 8, several hours  after MH370 vanished, that she  filed an official  report with police that very day – a full five days before  the search for the plane was expanded to the area around the Andaman  Islands.

News of her apparent sighting came as a blank  was drawn after two days of searching in the Indian Ocean for two objects deemed  by experts as possibly being from the missing plane.

Shocked: Raja Dalelah Raja Latife said she was alarmed  when she saw what looked like a plane in the water as she flew to Kuala  Lumpur

Location: The Andaman Islands are far north of the  debris that’s been sighted by a U.S satellite

The same reaction has come from a pilot who  questioned how anyone flying at about seven miles above sea level could see  anything like a boat or ship from so high up.

But Mrs Dalelah insisted to the paper: ‘I  know what I saw. I am convinced that I saw the aircraft. I will not lie. I had  just returned from my pilgrimage.’

A large part of what she thought was an  aircraft was submerged, she said. When she tried to tell an air stewardess what  she had seen, she was told to get some sleep.

When her plane landed at Kuala Lumpur at  about 4pm on that Saturday she told her children what she had seen. ‘That is  when they told me that MH370 had gone missing,’ she told the paper.

‘My son-in-law, a policeman, was convinced  that I had seen an aircraft and asked me to lodge a police report the same  day.

‘Many of my friends on the flight doubted me  at first, but they are beginning to believe me now that we know the plane  (MH370) turned back and entered the Indian Ocean.’

Many will warn against dismissing Mrs  Dalelah’s claims too quickly. The islands do lie across a route MH370 could  have taken after radar contact was lost and it would easily have been able to  reach them before Mrs Dalelah’s sighting at 2.30pm.

After its transponder was turned off at  1.21am on March 8 the plane, with enough fuel to last 2,500 miles, turned west,  following an established route towards India.

An ephemeral satellite ping registered at  8.11am suggested the plane was heading in one of two directions – south to where  the potential debris was spotted, or north into China and central  Asia.

The Andaman Islands lie 890 miles to the  north-west of Kuala Lumpur, well within range.

Officials still haven’t ruled out MH370 being  found in a northerly location, with aircraft and ships renewing their search in  the Andaman Sea between India and Thailand on Friday.

A colleague sent me this article by email today. 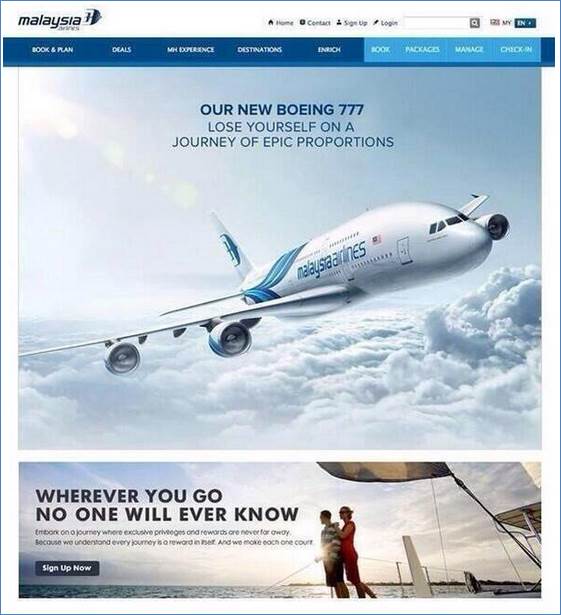 The image above, which has gone viral, purports to be a reproduction of an old Malaysia Airlines ad bearing the unfortunate slogan, “OUR NEW BOEING 777 – LOSE YOURSELF ON A JOURNEY OF EPIC PROPORTIONS”.  It is, of course a fake.
You will note that the aircraft depicted in the ad is not a Boeing 777.
The aircraft in the picture is a double decker, and has four engines.  That makes it a Airbus A380.
With a little bit of investigation, I able to find what I believe to be the original advertising copy from 2012.

Original MAS advertising copy for A380

The modification the of ad to depict the B777 and the change of the text therein, is done by somebody with far too much time on their hands, and under the present circumstances with the aircraft still missing, is in extremely poor taste!