New satellite images have identified 122 objects in a 400-square-kilometre area of the Indian Ocean 2,500km SW of Perth, WA, which Malaysian authorities believe are from the missing Malaysian airliner, Flight MH370.

These objects seen in images from a French satellite range in size from one metre to 23 metres in length and some appeared to be bright, possibly indicating solid materials, Malaysia’s acting Transport Minister Hishammuddin Hussein said in Kuala Lumpur on Wednesday night.

Officials said the images corroborate other credible leads, raising hopes ships in the area will be able to recover wreckage that can be identified as being from the plane that was carrying 239 people.

“This will enable us to further reduce the search area and locate more debris from the plane,” Mr Hishammuddin said. 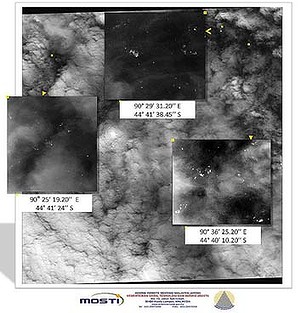 “They are not very far from objects sighted by the Chinese government,” he said. “This is clearly the most credible lead we have had so far.”  Mr Hishammuddin said satellite and radar data now “corroborates some form of objects and debris”.  “If it is confirmed to be MH370, at least we can move on with deep sea surveillance search and rescue and hopefully [find] the black box,” he said, referring to the plane’s recorder.

Mr Hishammuddin said the discovery is about 2500 kilometres south-west of Perth, in the same area where experts from Australia and China identified other objects from satellite images.  Mr Hishammuddin said Australian authorities will factor in possible drift and other factors while planes and ships head to the area.

The images have been sent to the Australian Rescue Co-ordination Centre in Perth, which is organising the search by countries including China, Japan and India.

“It must be emphasised that we cannot tell whether the potential objects are from MH370. Nevertheless, this is another new lead that will help direct the search operation,” Mr Hishammuddin said.

Of course, until the debris has been located and recovered, confirmation that this is MH370 cannot be confirmed.  As more satellite imagery comes to hand from the search area, it is more and more likely that this will be MH370. as the debris is has been sighted in the area identified by aviation search and rescue experts.  The mystery of how MH370 came to end up so far of course will still need to be answered.  Was it a catastrophic depressursation or on-board fire disabling passengers and crew with the aircraft flying on autopilot, or was it delibrate intervention the pilot(s) or passenger(s).

One comment on “MH370 – Debris found in the Southern Indian Ocean”